Breaking Bad - A Lesson In Innovation

I recently had the opportunity to interview Vince Gilligan, the creator, producer, writer, sometime director and overall mastermind behind ‘Breaking Bad’ one of the greatest television series ever made. In fact, in my opinion it’s the greatest. This is what I learnt from speaking with him:

Vince is a clever guy, but ‘Breaking Bad’ didn’t just leap fully formed out of his brain. He and his fellow writers worked really, really hard for a long time to create the story. Every episode took the 7 writers 3 weeks to plot out. The process was hard and it was often frustrating, but they kept going and they got there. Boy, did they get there!

Vince said the idea of ‘Breaking Bad’ was this: the hero becomes the villain. It sounds simple, but it was revolutionary for a long form TV series because usually the hero stays the same from episode to episode (think cop shows, sitcoms, etc). If you chart the progress of ‘Breaking Bad’ from episode 1 to episode 62 it remains utterly true to that simple, six word premise.

The plotting of ‘Breaking Bad’ is enormously intricate. Vince said that when he and his writers were plotting out the show they thought through the implications of every possible move they could make, and only committed when they were sure that they had picked the best option. For example, they once spent an entire week trying to work out how to get Walt out of a caravan.

Vince said that he felt that his writing team was at their best when, instead of trying to work out how to manipulate their characters so as to get into a particular position by the end of the series, they just concentrated on being true to what the characters would be thinking right now. So they would ask ‘What is Walt scared of now?’ and ‘What is Walt hoping for now’ and let the answers to those questions guide them

Sometimes leaders feel that they have to act like some idea of what everyone else thinks a leader should be ,and that can take them away from the very qualities that enabled them to become a leader.

Despite being one of the most praised and in-demand creative producers in the world at the moment,  Vince is unassuming, extremely modest, eager to share the credit for the show with others and thoroughly and utterly nice. He made time to talk to those who wanted to meet him, and didn’t act as if he knew all the answers.  He didn’t seem to feel like he had to act like ‘the brilliant TV producer’ or ‘the talented writer.’

Vince created Walter White, a mild-mannered school teacher who had never fulfilled his potential. When Walt is diagnosed with inoperable cancer, he decides to use his chemistry skills to start cooking meth to make some money to support his family when he is gone. Now, that’s not a good choice, but he realises that he has been half asleep for most for his life – not living, just existing. It’s a good reminder to us all to think about what we are doing, and to make the most of our time.

This experience, and what an experience it was, has reminded me of the value of taking inspiration from others when looking to be more innovative. By learning from the journeys of people like Vince we can start our own long paths to fulfilling our dreams and creating our ideas, armed with a little more knowledge.

Go forth and create - if only because I need another amazing show to watch. 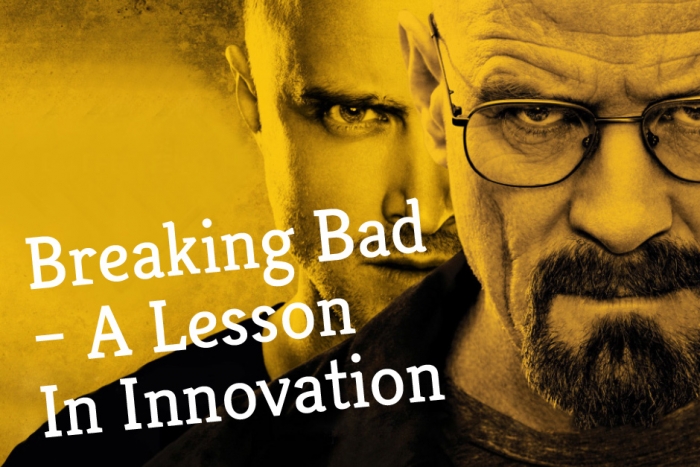 Possibility Thinking - How a crisis can help you create some of your best ideas. more

Artificial Intelligence - Providing Hope at a Time of Crisis more

Breaking Bad - A Lesson In Innovation