It remains to be seen whether it will also represent an economic shock – in the same way (if not on the same scale) as did the collapse of Lehman Brothers in September 2008 or the first revelations of the depth of Greece’s financial woes in April 2010. That may depend on how long, and how far, the reaction in financial markets continues – and how effective central banks (in particular) are in countering that reaction.

The Brexit referendum result was a victory of the old over the young; of the fearful over the hopeful; of the angry over the ambivalent; of the insular over the cosmopolitan; and of an imagined past over an uncertain future. It was also, to some extent, a victory of the “voiceless” (in the perception of those who voted to leave the EU) over the “powerful” (again, in the perception of those who voted to leave). And it was a vote for greater control by national governments over the movement of goods, services and (especially) people across national borders, and against individuals’ ability to choose freely where they live and from where they acquire goods and services.

The conflict between these opposing positions and sentiments is not unique to the United Kingdom. It is evident across Europe, and in many countries those who also wish to reverse the drift of powers away from national governments to the EU will draw great heart from the Brexit vote. It is also evident in the United States, where the anti-establishment sentiment behind the emergence of Donald Trump as a contender for the most important elective office in the world may be strengthened by the triumph of what had been considered “unthinkable” on the other side of the Atlantic.

And the conflict is, to some extent, evident here in Australia as well – despite the fact that we have experienced far fewer of the economic hardships that have given rise to the sentiment on display on both sides of the Atlantic this year.

The gradual but seemingly inexorable movement towards less government control over the movement of people, capital, goods and services across national borders, which began in the late 1970s, may well have reached its apogee. Indeed, some of these freedoms have already been eroded in the name of “national security” over the last fifteen years. Predictions that the British economy will fall swiftly into recession are almost certainly premature, and when Remain supporters put this argument during the campaign it seemed only to add to the anti-establishment sentiment behind the Leave vote. But the UK – or what’s left of it, if Brexit ultimately leads to secession by Scotland and, later, Northern Ireland – will undoubtedly be a diminished entity, economically as well as politically, as a long-term consequence.

Britain takes only 2.7 per cent of our exports of goods and services, and supplies just 3.7 per cent of our imports. It is the origin of 16.5 per cent of the total stock of foreign investment into Australia – although that share has declined from 23.0 per cent a decade ago, and is now more or less matched by investment from other EU countries (which has increased from 9.2 per cent over that decade). Britain is also the destination for 17 per cent of total Australian investment abroad – although the use of at least some of that investment as a “base” for accessing the (much bigger) pan-European market may be undermined by Brexit, unless Britain is able to negotiate similar terms for access to the EU market to those it has enjoyed as a member. Nor does the sharp fall in sterling matter much here – except to the extent that it discourages Britons from visiting Australia – since Australia and Britain are not significant competitors in other markets.

A greater concern for Australia is the shock the vote represents to global financial markets. The Brexit vote has seen a rise in the US dollar and the Japanese yen against other currencies – something that will be troubling to both the US Federal Reserve and the Bank of Japan. The Fed may yet again defer further increases in US interest rates; the Bank of Japan may be prompted to take Japanese interest rates further into negative territory (even though their initial move in that direction has produced counterintuitive results for both the yen and the Japanese share market).

Such steps may prompt further capital inflows into Australia, where interest rates may be at record lows but are nonetheless high by international standards. This would put further unwelcome upward pressure on the Australian dollar, forcing the Reserve Bank to cut interest rates even more, despite the lack of any domestic policy rationale.

In the long run, perhaps the most disturbing implication of the Brexit vote for Australia will be the encouragement it may give to those who want national governments to reassert greater powers over the movement of goods, services, capital and people across national borders. Australia, and Australians, have been among the greatest beneficiaries of developments in the global economy over the past three or four decades. We would be among the biggest losers from any widespread reversal of the policies that have facilitated those developments.

That said, those who have argued for, and who continue to believe in, the benefits of greater freedom of international movement of goods, services, capital and people must recognise that there have nonetheless been costs – and that these, together with the benefits, have not always been fairly shared. Unless more is done to reverse the stagnation in real wages, the increasing inequality in the distribution of income and wealth, and the greater sense of insecurity around employment and housing tenure, the sentiments reflected in the Brexit vote will be repeated around the world, including here in Australia.

This article first appeared in Inside Story: //insidestory.org.au/what-brexit-means-for-australia 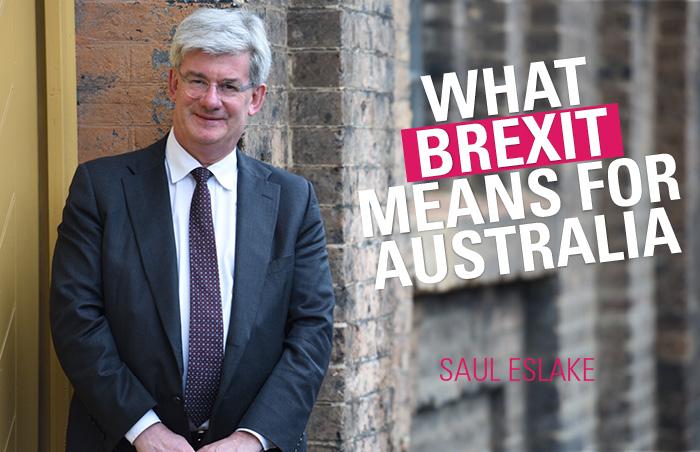 For the finance industry, now is the time to innovate