Dr Catriona Wallace shares profoundly personal experiences of the destruction of millions of hectares of farmland in Australia – including her own – and how stronger gender diversity in leadership can assist in helping combat the new reality that faces Australia.

During Australia’s unprecedented fire season my family’s farm, a 10,000 acre cattle station in Northern NSW, was incinerated. On New Year’s Eve three fire fronts met at Rosedale the town where we have a family beach house and the village was decimated. By a stroke of incredible fortune our house remained one of the few standing.

It was like the time just before the world ends.

With 46 million acres burned – 20 times that of the Amazon; with 1.25 billion native wildlife killed; 28 people dead and billions of dollars in recovery projected, we are clearly in a Climate Emergency.

When I walked the barren, charred streets and bushland I saw only men. Firefighters, electricians, military and tradesmen. There were only utes and trucks on the roads.

But running the evacuation centres, coordinating community meetings, running the internet satellite station, pushing the updates through social media, coordinating the food drops, organising weather updates and overseeing the mental health initiatives were the women. A powerful and necessary role.

It was like the men we’re fixing the physical world and the women we’re fixing the community, mental and emotional worlds. This disaster and state of emergency clearly needed both men and women leading, yet at the most senior levels of decision making around the fires and climate change we don’t yet see diversity in leadership.

I believe there is a stronger role for women at times of large-scale emergency. This is due to women’s ability to:

Stronger gender diversity in leadership is absolutely needed going forward as Australia’s experience may be just the beginning. And what next?

I thoroughly support Greenpeace’s call for action on three points:

We are in a Global Climate Emergency. It’s started. It’s time for us all to act. Let’s talk about this together!

For further information on Dr. Catriona Wallace or to enquire about making a booking for your next conference or event please contact the friendly ODE team 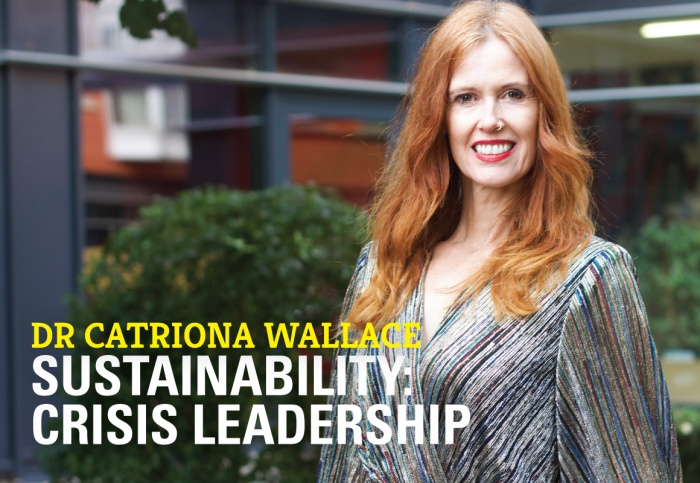 Sustainability - We have the power! more

Sustainability in Business and Life more

The Sustainability of Superannuation more